Launch Event for "Sceptic at Large" by Roger Helmer MEP

Roger Helmer writes:
Yesterday saw the launch in London of my new book “Sceptic at Large” in the former CCO building in Smith Square — now the headquarters of the occupying power in the UK.  The EP office it may have been, but at least we were in the Churchill Room, with the portrait of the great man looking benignly down on our efforts.
The room was packed, with many standing at the back, and the assembled throng included MPs — Christopher Chope, Heather Wheeler, Robert Goodwill (telling me that his presence did not signify approval of proceedings from the Whips’ Office), and of course my old comrade-in-arms Chris Heaton-Harris, to whom the book is dedicated.  The Upper House was represented, as was the European parliament (Nigel Farage MEP).  There was a good smattering of ECR staff (the have an office in the building), Tim Montgomerie and Jonathan Isaby from ConHome, Matthew Elliott from the Taxpayer’s Alliance, folk from the European Foundation, a video team from the BBC, groups from the Freedom Association and my publisher Bretwalda Books (Rupert Matthews), plus my staff and former staff, and other staffers from the HoC across the road.
After the event (I fear a transcription of my speech may end up on this blog), the teams from TFA, Bretwalda and my office, plus Chris Heaton-Harris, repaired to the restaurant in the basement of Saint John’s Church in the middle of Smith Square, where there’s an excellent restaurant — the Goan Tiger Prawn Curry was particularly good.
We’ve already had orders in from the UK and the USA for the electronic (Kindle) version of the book.  Owing to an error of timing at the dispatchers, quite a number of members of the audience at Smith Square had already received a copy, and made some very generous comments.  Perhaps the nicest was “I expected it it to be solid and dull, but actually it’s very interesting”.  “Sceptic at Large” is available from Amazon. 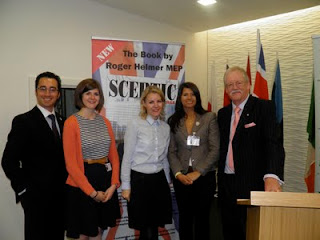 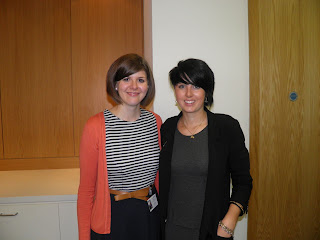 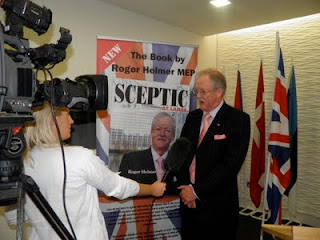 Posted by Rupert Matthews at 08:23