BOOK SALE - How the Steam Railways came to Surrey 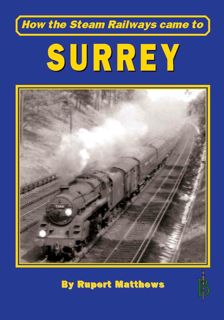 For a limited time only this book is available at a reduced price.


When I was a boy I lived overlooking the main railway line from London to Southampton. It had been built in 1838 by the London and Southampton Railway, later to become the famous London and South Western Railway (LSWR). From our front garden you could see the trains thundering back and forth along the embankment that ran like a stripe across the landscape. By then, of course, the glory days of steam in Surrey were long gone. It was electric trains that raced back and forth. But the odd steam train did go by, the plume of smoke drifting up into the air to disperse over the landscape. The railways came to Surrey in the 1840s and they were still being built in the 1930s, making Surrey most unusual among the counties of England. Across most of the country, railway building had ground to a halt long before the line to Chessington was opened in 1939, complete with suitably modernistic station architecture.
Those railways were to have a dramatic impact on the landscapes, people and economy of Surrey. Indeed, the Surrey that we see today has been largely created by the railways. It is no exaggeration to say that more than any other county in England, Surrey has been built on railways.

Rupert Matthews has written over 150 books for different publishers, achieving significant sales in a variety of markets both in the UK and abroad. His works have been translated into 19 languages and have been shortlisted for a number of awards. Rupert has been a freelance writer for 20 years, working in-house at a major book publisher before going freelance.
Posted by Rupert Matthews at 01:31