Just one week after the thrilling by-election in Corby, the definitive history of the campaign has been written by Corby journalist Janet Bew and published by Bretwalda Books as a printed book and ebook.

Corby journalist Janet Bew followed the by-election campaign from the moment Louise Mensch stood down to the declaration of the final result. She tracked the candidates, followed the campaign teams and analysed the twists and turns of the unfolding drama.
The sudden and unexpected resignation of high-profile Conservative Member of Parliament Louise Mensch threw the national spotlight on to the quiet Northamptonshire town of Corby and its nearby villages. This is a key swing seat that was held by the Conservatives throughout the Thatcher and Major years, but went Labour in the 1997 Blair Landslide. In 2010 the Conservatives won Corby back, helping to put David Cameron into Downing Street.
The 2012 By-election was quickly seen by political commentators as being a key test for Prime Minister David Cameron and his leadership of the Conservative Party. If he lost Corby and lost it badly he would be in trouble. Similarly if Labour did not win convincingly their leader Ed Miliband would face serious questions from his own Party.
But while the commentators sat in their armchairs, the candidates and party workers were slogging it out on the streets of Corby and nearby villages. Corby town is staunch Labour territory, the villages solidly Conservative. But this bi-partisan picture was quickly disrupted by a strong campaign launched by UKIP, with the great and the good of Westminster flocking to campaign in the town - and the idosyncratic Mr Mozzarella providing light relief.
Very soon the Corby By-election developed into one of the closest, bitterest and least predictable by-elections of recent years.
The full story of the campaign is told here, for the first and only time. 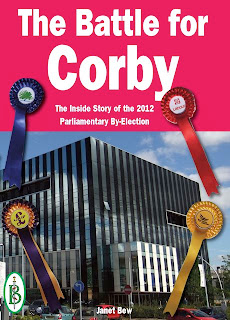