BOOK OF THE MONTH - Para News 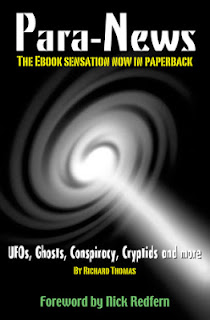 Publication Date: 11 Oct 2012
A gripping account of the very latest developments in the esoteric worlds of conspiracy theories, Ufology, paranormal investigations and the bizarre. Most people will have heard of UFOs, ghosts and yetis, but what about the wilder shores of the paranormal, the conspiracy theorists and down right bizarre? In this book, one of the world's leading and most prolific paranormal bloggers takes readers on a voyage of discovery like no other ever written. The key players are interviewed, explaining their views on the JFK assassination, the shadowy and sinister Illuminati, the influential Bilderberg Group, allegations of an incipient New World Order, cover ups and how hidden messages can be found in Hollywood movies such as Blade Runner and TV shows including the X-Files. Dean Haglund, Richard Dolan, Steve Watson, Richard Holland, Nick Pope, Timucin Leflef, Bryce Zabel, Christopher Knowles and Nick Redfern are all here. The book takes a critical look at timeslips, ghosts, UFOs, cryptids, mind control, aliens, disinformation, black-ops, the Bermuda Triangle and a host of other paranormal phenomena. Social Media * Dedicated FaceBook page for this book refreshed daily during launch month, thereafter weekly for one year. All FB fans of Bretwalda will be alerted to publication. * Will feature on publishers Blog and Twitter accounts Marketing Highlights * Viral video to be released in October 2012 * Author is regular contributor to several leading paranormal and esoteric blogs and will be trailing the publication frequently.
Posted by Rupert Matthews at 03:43