Esoteric superstar Nick Redfern is, of course, a big name but I have a special reason for admiring him. Back in 2006, I sent Tim Binnall an email that asked if he could possibly ask a future BoA:Audio guest about the 1974 Berwyn Mountain incident or "Welsh Roswell", in which I have a special interest.  A few months later, he asked British Ufologist and author Nick Redfern about the Berwyn case while attending the UFO Crash Retrieval Conference IV. Then, about a year later, Tim had another chance to interview Nick and this time, on my behalf, he asked him about the Alien Big Cats phenomenon in the UK and related an ABC sighting my younger sister actually had here in Wales. The episode also saw me being brought further into the BoA fold, with Tim coining me the "BoA UK Correspondent." So, I was delighted to have the chance to interview Nick Redfern in the Room 101 format.

Nick, of course, is a highly successful author from the UK who has written several books on UFOs and other esoteric subjects. In such a US-centric field, his decorated writing career has been a huge source of inspiration to someone, from the same side of "the pond," who hopes to become an esoteric author himself someday. At last a chance to interview the man myself ...

Richard Thomas: First things first. Thank you very much for taking the time to answer these questions. One of the first UFO books I ever read was Cosmic Crashes, a book you wrote detailing cases of alleged UFO crashes in the UK. One of the most interesting crash stories investigated in the book is that of a supposed UFO crash somewhere in the UK during WWII. The possible link to the JFK assassination was interesting. What do you think the truth of the matter could be?

Nick Redfern: There have been rumours for many years of an alleged UFO crash – or Foo Fighter crash – in Britain at some point during the Second World War. Unfortunately, the details are very brief and no-one has really been able to pinpoint with any real accuracy what exactly happened, where and when. However, there are stories of elements of the British Government and military supposedly examining such a device – and crew – at some point prior to 1955. The weird thing is that details of this story turn up in a controversial "leaked" document that has ties to the JFK assassination. And as bizarre as it may sound, there are many threads that link UFOs and the JFK assassination, which leads some people to suspect there is a direct connection. Needless to say, it's a highly controversial area, but it's one on which every so often a new bit of data will surface.

Richard Thomas: Perhaps the most interesting case discussed in the book though is that of the 1974 Berwyn Mountain incident or Welsh Roswell. The bit in the book about the alleged transport of dead alien bodies recovered from the crash site was particularly interesting. What do you think might have happened there? Do you think it was a genuine UFO (whatever they may be), the misinterpretation of natural phenomena, some kind of black project or perhaps something else?

Nick Redfern: The Berwyn Mountains crash-story of 1974 is one of the strangest and most enduring cases I've looked into. It's one of those that never goes away, even when down-to-earth explanations have been offered. Back in the mid-90s, I was of the opinion that a UFO had come down, then I changed my mind after reading the research of Andy Roberts. However, I still get accounts now and again from locals and retired military people (all specifically from RAF Valley, interestingly enough) of knowledge of bodies recovered and taken to Porton Down, Wiltshire. So, I'll be the first to admit that, today, it's one that continues to puzzle me. On the one hand, I am convinced that Andy has solved massive parts of the story. But, on the other hand, it's difficult to dismiss the testimony of the military people who have accounts to relate, and nothing to gain by spreading a false story. I think, though, that we have not heard the last of the case by any means!

Richard Thomas: In Cosmic Crashes, you also hypothesize about the existence of an MJ-12-like group operating in the UK, what you call MJ-UK. Do you still think there could be such a covert group and what about the alleged UFO ties with RAF Rudloe Manor?

Nick Redfern: The whole Rudloe-UFO saga has been a puzzle in itself. There's no doubt that the RAF's Provost & Security Services (who were based at Rudloe for two decades) have played a role in official UFO investigations. There are even a few declassified files available at the National Archive, Kew. But the big question is the particularly Matthew Williams in the mid-to-late 90s – that Rudloe's role went far beyond that officially admitted by the MoD. Others merely see it as a minor aspect of official UFO investigations that got blown up out of proportion by the UFO research community. As with the Berwyn case, I still get accounts now and again from people talking about how, at one point at least, Rudloe was involved at a far deeper level. But I will concede that actually proving this has not happened yet.

Richard Thomas: In Body Snatchers in the Desert, you make a fair case that the famous Roswell incident might be explained by classified military experiments carried out after WWII. In light of this, what do you think about the work of Nick Cook (author of The Hunt for Zero Point) who suggests that many UFOs can probably be explained by US military black projects, perhaps even anti-gravity aircraft?

Nick Redfern: There's absolutely no doubt in my mind that the UFO issue has indeed been utilised – and very successfully too – as a cover for classified military activity, such as the test-flying of prototype aircraft, etc. In "Body Snatchers" I reference a number of cases aside from Roswell that might be classic examples of fabricated UFO stories to hide something more down to earth. I definitely think Cook's work is valid and that he has uncovered some genuine material on very radical aircraft and that gravity manipulation and control is linked to that. Around the time of Roswell, however, I think it was more to do with radical designs, rather than super-advanced technology.

from "Para-News" by Richard Thomas
buy your copy HERE 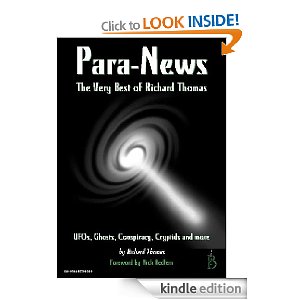 Posted by Rupert Matthews at 01:03