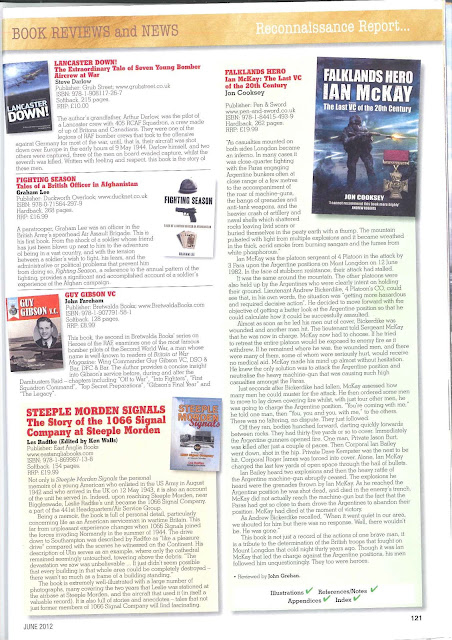 Our book "Guy Gibson VC", part of the Heroes of the RAF series, has been reviewed in the Britain and War magazine (see scan).


Guy Gibson was chosen to lead the great Dambusters Raid of 1943 as he had already proven himself to be a skilled pilot and a magnificent leader of men. Having joined the RAF in 1936, Gibson was a bomber pilot when war broke out. He won a DFC in July 1940 then, having completed a tour of operations volunteered for Fighter Command and flew nightfighters on 99 sorites during which he was awarded a bar to his DFC and the DSO. He then returned to Bomber Command and flew 46 more missions before being chosen to form and command No.617 Squadron for the Dambusters Raid. After a period off operations, Gibson returned to Bomber Command to act as a Pathfinder. He was killed on one such raid in September 1944.

This book looks at the life and career of the man who led the most famous bombing raid of World War II. It is a gripping account of his life and exploits, revealing new and little known facts about Guy Gibson for the first time.

About the Author
John Fareham is the son of an RAF veteran who grew up on RAF bases around the world. He now lives only a short drive from RAF Scampton from which Gibson flew his famous Dambuster Raid. This is John’s first book about the RAF, but is far from being the last.

Posted by Rupert Matthews at 06:56