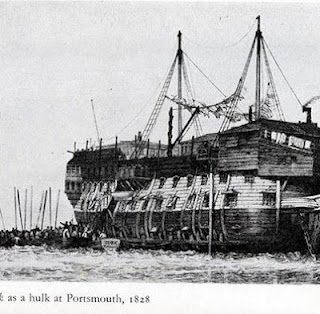 Like many convicts of their day, members of the Aldington Blues Gang featured in the novel were held on hulks. These were ships of the line that had been demasted and moored around the coast. In their case, the ships were the York and Leviathan moored at Portsmouth.
About the Book

Violence, love, loyalty and betrayal among the smugglers who once terrorised the coasts of southern England. The true tale of the Aldingston Blues Gang retold as a gripping novel.

Marian Newell became a technical author in 1986 and started her own writing business with her partner in 1998, through which she covers a wide range of subjects from horticulture to software. Having grown up in the Weald of Kent, she has many childhood memories of the Cinque Ports and their lurid smuggling folklore. She first encountered the Aldington Gang, known as the Blues, while researching her family history. Her great-great-grandfather was a Ransley who emigrated to Canada and disappeared mysteriously, into the stomach of a bear or the arms of another woman according to rumour.

Finding the story of the Blues more thrilling than her ancestry, Marian set out to imagine the drama around events in Aldington in the 1820s. There was plenty of source material, from local historian John Douche’s books of the 1980s to official records, witness statements, newspaper reports and personal journals of the day. Her novel tells the story of the central thirteen men, the Devil’s Dozen of the title, not as it was — something we can never know — but as it might have been.

Posted by Rupert Matthews at 00:53