NEW EBOOK - A Life at the Chalkface: A Memoir Of A London Headteacher

NEW EBOOK - A Life at the Chalkface: A Memoir Of A London Headteacher 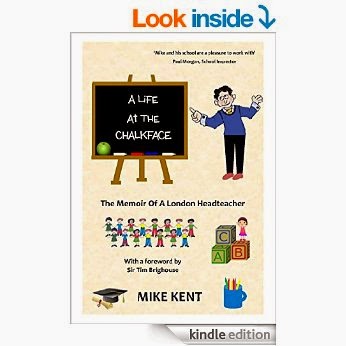 Foreword by Sir Timothy Brighouse.
A realistic but touching look at school life at a tough inner city school by the headteacher who turned the school around and is an acclaimed columnist for the Times Education Supplement and other publications.
‘In the early eighties, Mike Kent took on the headship of a tough, inner city primary school and built it into one of the most popular primary schools in London.
In ‘A Life At The Chalkface’ Mike describes with humour and insight the challenges he experienced as English primary education changed beyond belief during three decades. Never a stranger to controversy, Mike survived a racial tribunal, an eighteen month battle with Ofsted, local school inspectors who were determined to make him conform, and bureaucrats who viewed children merely as outcome units.
His love of teaching and teachers shines through as he describes the many unique characters who passed through his school… the boy who wanted to be a bus, the ex-pupil who became a society thief, the teacher who couldn’t throw anything away, the fire officer who described children’s art as hazardous wall substances and the parent who was determined to enrol his three month old daughter in the Reception class.
A Life At The Chalkface gives a unique insight into the trials and tribulations of headship, and it will be thoroughly enjoyed by anyone with an interest in education and a sense of humour.’

Contents
Foreword by Sir Tim Brighouse
Introduction
Chapter 1 - A School Of My Own
Chapter 2 - Finding My Feet
Chapter 3 - First Day At The Chalkface
Chapter 4 - A Term Of Trial
Chapter 5 - A Test Of My Leadership
Chapter 6 - Walking With Dinosaurs
Chapter 7 - The New Inspector Calls
Chapter 8 - A Tidal Wave Of Change
Chapter 9 - Appeals, Appointments and Questionable Governance
Chapter 10 - All Children Great And Small
Chapter 11 - No Parents Past This Point
Chapter 12 - The Computer Revolution
Chapter 13 - Challenging Ofsted
Chapter 14 - The Bureaucratic Nightmare
Chapter 15 - Polythene, Pigeons and Eccentric Electrics
Chapter 16 - Troubling Teachers
Chapter 17 - The Roar Of The Greasepaint
Chapter 18 - Winding Down

About the Author
Mike Kent has for the last 13 years been a featured columnist on The Times Educational Supplement. For two years running, he was a runner-up for the PPA Columnist Of The Year award. He has written over 400 articles for educational magazines and newspapers, and 27 musical plays for children. He recently retired as headteacher of a tough inner city school.
Print book out soon
Get your copy HERE
http://www.amazon.co.uk/Life-Chalkface-Memoir-London-Headteacher-ebook/dp/B00TEB4F8Y/ref=sr_1_1?s=digital-text&ie=UTF8&qid=1427446001&sr=1-1&keywords=bretwalda+life+chalkface