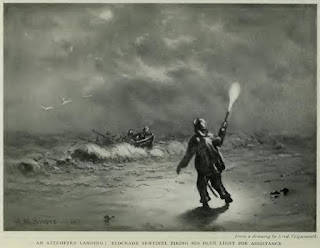 A blockade sentinel patrols the beach and calls for assistance when he sees smugglers attempting a landing (taken from 'The Smugglers' by Lord Teignmouth and Charles G. Harper).


From the novel "A Devil's Dozen" by Marian Newell.

Violence, love, loyalty and betrayal among the smugglers who once terrorised the coasts of southern England. The true tale of the Aldingston Blues Gang retold as a gripping novel.

Marian Newel has lived all her life in the land where the smugglers once held sway. She grew up hearing the tales of those days and now has written them up in fictionalised form as her first published book. She is the great great granddaughter of one of the smugglers featured.

Posted by Rupert Matthews at 01:02