Details of our Icelandic speaker

Bjarni Benediktsson, Jr., (born 26 January 1970 in Reykjavík) is an Icelandic politician and leader of Icelandic Independence Party.
Bjarni was elected leader of the conservative Independence Party at its national convention on 29 March 2009 with 58.1 percent of the vote, about a month before the April 2009 Icelandic legislative elections.[1] The party came in second in the elections with 16 seats, nine fewer than in the previous elections. After conceding defeat on 26 April 2009, Bjarni said his party had lost the trust of voters. "We lost this time but we will win again later," he said.[2]
The lawyer stems from a family associated with Iceland's political and economic elite.[3]
After obtaining a law degree at the University of Iceland, Bjarni completed his studies in Germany and the United States before returning to Iceland to work as a lawyer. He entered the national parliament in 2003 and has been active in several committees in the areas of economy and taxation, industry and foreign affairs.
Married with three children, his interests include football and fishing.

The event begins at 5.15pm in the IPU Room, just off Westminster Hall in the Palace of Westminster. Please allow time to get through security. 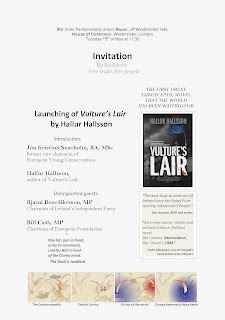 Posted by Rupert Matthews at 00:41