King Charles I surrenders at Newark, 1646


Since the summer of 1645 Cardinal Mazarin, chief minister to the French king Louis XIV, had been interfering in English affairs in an effort to increase French influence and ensure that whoever won the Civil War would feel that they owed France a favour. He sent agents to talk to Parliament, to the Parliamentarian generals, to the Scots and to Charles. In February 1646 the French envoy to the Scots, Jean de Montereul, reported back that the Scottish Parliament was no longer keen on supporting the English Parliament’s determination to fight the war to the finish and was willing to come to a separate peace deal with Charles.
Mazarin passed the news on to Charles and offered to act as an honest broker between Charles and the Scots. Charles promised to accept all the Scottish demands that applied to Scotland, but would not accept that the Presbyterian faith should be forced on the English. Talks were still going on when Leven was called away to Newcastle on Tyne to attend to some business. His deputy, David Leslie, was rather startled on 26 April to learn that King Charles was staying at the Saracen’s Head Inn in Southwell, less than ten miles away. Charles had come alone with only a couple of servants. A message from the king announced himself content to put himself into the hands of the Scottish forces and to conclude a peace deal as discussed.
Leslie was in something of a quandary. He was keen to get his hands on the king and conclude a peace, but at the same time was painfully aware that he and his army were more than 200 miles from the Scottish border and that English armies much more powerful than his own were between him and home. He did not want to antagonise the English Parliamentarian commanders, nor give them cause to accuse of him a betrayal of trust. He sent a message back to the king saying that he could not welcome the king while Newark remained defiant. Charles had to order Belasyse to surrender.
On 7 May a Scottish officer appeared close to the bridge over the Trent and announced he had a message for Belasyse. The message turned out to be a letter from the king, signed in his own hand, instructing Belasyse to surrender Newark to the Scots. When he read it, Belasyse burst into tears and collapsed into a chair. The following day Belasyse and his men marched out of Newark with all the honours of war. Their flags were flying, their drums beating as they marched proudly in step out of the fortress town they had defended for so long.
The Great Siege of Newark was over.

from The Sieges of Newark by Rupert Matthews

A book dedicated to the four sieges of Newark during the English Civil War, the last of which marked the collapse of Royalist power in the Midlands. In 1642 King Charles I summoned Newark to support him, which it did with men, money and munitions. The city and castle where thereafter a loyal bastion of Royalist support on the edge of Parliamentarian territory. A roundhead attackin 1643 was driven off, as was a desultory siege in 1644. In 1645 the Roundheads arrived in large numbers, with heavy cannon and great determination. The Royalist garrison fougth back with imagination and courage, turning this into a text book example of 17th century seigework. After seven months garrison surrendered, ending Royalist hopes in this area of England. This book follows the standard pattern set by others in the Bretwalda Battles series. The reasons for and course of the war in question are outlined, then detailed analyses of weapons, tactics and strategies are given with particular reference to this battle. The course of the battleis then followed, with comment on what there is to see at the site today. Short biographies of the commanders are also given. The aftermath of the battle, its effects and importance to the progress of the war are then described. The "Bretwalda Battles" series has been running with increasing success as ebooks for some time. Now the first books in the series are being published in print format. 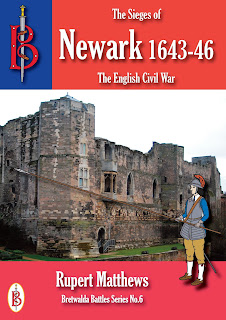 Posted by Rupert Matthews at 02:20