The approach to the Battle of Losecoat Field, Rutland


The approach to the battle on the morning of 12 March 1470. Sir Robert Welles and the rebels were advancing on Edward IV’s camp at Stamford when Edward’s scouts sighted them at Empingham. Welles then turned aside to seek a defensive position, near what is now Tickencote Warren.

From "The Battle of Losecoat Field" by Rupert Matthews.


A book dedicated to the only battle ever fought in Rutland - the Battle of Losecoat Field, a turning point in the Wars of the Roses. In 1470 the Yorkist King Edward IV was apparently secure on his throne, but unknown to him he was about to be betrayed by his own brother, George of Clarence, and the powerful nobleman Richard Earl of Warwick. The rebellion began in Lincolnshire with an uprising of discontented peasanats egged on by fugitive Lancastrians, Edward hurried north up the Great North Road with a small force unaware that he was betrayed and that he would meet his enemies near Empingham in Losecoat Field. This book follows the standard pattern set by others in the Bretwalda Battles series. The reasons for and course of the war in question are outlined, then detailed analyses of weapons, tactics and strategies are given with particular reference to this battle. The course of the battleis then followed, with comment on what there is to see at the site today. Short biographies of the commanders are also given. The aftermath of the battle, its effects and importance to the progress of the war are then described. The "Bretwalda Battles" series has been running with increasing success as ebooks for some time. Now the first books in the series are being published in print format. 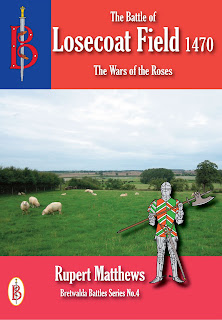 Posted by Rupert Matthews at 01:14