The Battle of Wimbledon ad568 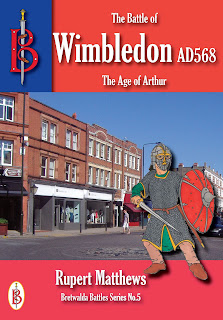 A book dedicated to the epic Dark Age Battle of Wimbledon,
a turning point in the wars fought during the Age of Arthur.
In the chaos that engulfed Britain after the death of the enigmatic Arthur, one battle stands out – Wimbledon. This was a key battle fought in the heart of the Dark Ages for control of southern Britain that pitched the King of Kent against Ceawlin of Winchester. The victory won here decided the fate of Britain for a generation. The area is now heavily built up, but the key features of the battle can still be traced on the ground.
This book brings an exciting new look to the Wars of the Age of Arthur. The emphasis is on the battle and the men who fought there. There are detailed analyses of weapons, tactics and strategies, tactical diagrams explain how the troops formed up and moved, and a study of the commanders. The course of the battle is followed with the aid of maps, relating to the ground today. The aftermath of the battle, its effects and importance to the progress of the war are then described.

Posted by Rupert Matthews at 23:42