The Town Walls of Leicester in the siege of 943 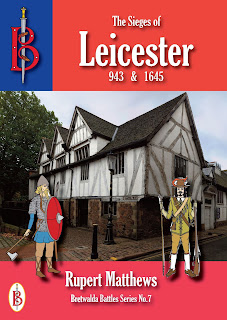 King Edmund of Wessex had, meanwhile, been gathering his army to face the Viking threat. He probably approached Leicester up the Fosse Way, so he would have reached the town from the southwest along what is now Narborough Road. As Edmund approached the town he will have seen the raven banner of York fluttering over the battlements, and the gates firmly closed against him.
The walls that faced Edmund and protected Olaf were those built during the Roman period. They were about six centuries old by this date, but seem to have been kept in good repair over the years. Certainly they were strong enough to stop Edmund in his tracks so they must be presumed to have been substantially intact. Like most Roman town walls in Britain, those of Leicester were not built by the Roman Army but by the local town or civitas authorities. They were, therefore, rather less impressive than the fortifications of Hadrian’s Wall or the mighty Saxon Shore forts such as Pevensey or Portchester. But that does not mean they were not effective.
At Leicester the walls followed the standard Roman shape of an oblong with rounded corners, rather like a playing card. No trace of any towers has been found, but that is not to say that they did not exist. Given the limited number of archaeological digs here it is hardly surprising none have been found. The walls themselves were built of dressed stone facings covering rubble interiors held together with cement. At intervals there were horizontal bands of narrow bricks which served to strengthen and stablise the rubble cores. The walls were about 20 feet tall and up to six feet thick. Such walls were able to withstand a degree of pounding by Roman era weaponry of catapults and battering rams, but would not have withstood a determined assault by the Roman army for long.
But neither Edmund nor any other 10th century commander had the type of heavy siege equipment that the Roman army took for granted. Siege operations were limited and rudimentary. Wooden walls might be fired or scaled using ladders, but stone walls of the scale at Leicester were proof against either form of attack if properly defended. Gates could be vulnerable to assault by axes if poorly constructed or again could be burned down. If the defenders were few in numbers they would not be able to man all of the defences adequately at the same time, so a surprise assault with ladders might be successful, but it would be a risky business.
The only real weapon that a commander of this date had against well repaired Roman walls was starvation. By surrounding a town food supplies could be cut off, after which it was only a matter of time before surrender became inevitable.


from "The Sieges of Leicester" by Rupert Matthews.


A book dedicated to the three sieges of Leicester in 943 and in the summer of 1645, events that saw much of the medieval city razed to the ground and hundreds of citizens killed. Leicester spent most of the English Civil War at peace, a garrison town for Parliament in the Midlands. Then in May 1645 Royalist Prince Rupert arrived and laid siege to the city. After conducting a skilful siege, Rupert's men assaulted the town and burst in to butcher the garrison and loot the houses and churches. Rupert marched off, leaving his own garrison. The Royalists had barely repared the walls when a Roundhead army arrived, laid siege and then stormed the town in their turn, adding more bloodshed and destruction. This book follows the standard pattern set by others in the Bretwalda Battles series. The reasons for and course of the war in question are outlined, then detailed analyses of weapons, tactics and strategies are given with particular reference to this battle. The course of the battleis then followed, with comment on what there is to see at the site today. Short biographies of the commanders are also given. The aftermath of the battle, its effects and importance to the progress of the war are then described.
Posted by Rupert Matthews at 01:19