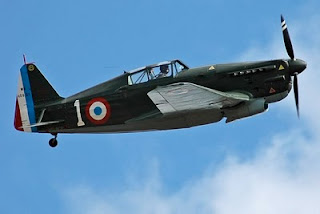 After years of underinvestment and reliance on old fashioned models, the French Air Force decided in 1935 to order a few modern fighters and the MS406 was the result. In 1938, Joseph Vuillemin took over as head of the Air Staff and ordered a thousand of the MS406 fighters as a stop gap until more modern models could become available. All the MS406 fighters were delivered before the Germans attacked, but they did not perform well. Under the peace deal between France and Germany, the French were retain half the surviving fighters to protect their overseas colonies, and the Germans seized the rest for sale to Finland, Italy and other allies.

This is an extract from Hitler's Forgotten Secret Weapon

Learn more and buy the book on THIS LINK

Posted by Rupert Matthews at 02:35 No comments: