The Battle of Northampton, final phase

Soon after Edward broke into the fortified deer park he led his men to attack Buckingham’s men in the flank and rear. The Lancastrians then broke and fled, though they were to find their escape route blocked by the River Nene.


from The Battle of Northampton 1460 by Rupert Matthews.


A book dedicated to the Battle of Northampton, fought as part of the Wars of the Roses in 1460. In 1460 the Yorkist faction in the Wars of the Roses seemed doomed. The Duke of York was dead, his sons in exile, his friends in hiding and his army scattered. Then Edward, the dashing new Duke of York, returned to England from Ireland and summoned his supporters to join him. Among those heading to support Edward was the Earl of Warwick, but at Northampton Warwick encountered a powerful Lancastrian army under the Duke of Buckingham. The four hours of savage fighting that followed changed the situation entirely and gave the Yorkists the upper hand. This book follows the standard pattern set by others in the Bretwalda Battles series. The reasons for and course of the war in question are outlined, then detailed analyses of weapons, tactics and strategies are given with particular reference to this battle. The course of the battleis then followed, with comment on what there is to see at the site today. Short biographies of the commanders are also given. The aftermath of the battle, its effects and importance to the progress of the war are then described. The "Bretwalda Battles" series has been running with increasing success as ebooks for some time. Now the first books in the series are being published in print format.
Posted by Rupert Matthews at 05:58 No comments: 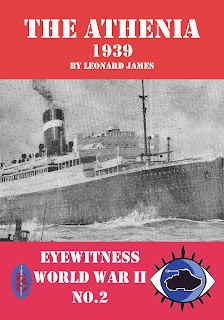 An ebook contianing eyewitness accounts of the first British ship to be sunk in World War II - just 10 hours after war was declared. Complete with explanatory text and background on the men and machines involved.
The Athenia left port in peacetime, heading for Canada with more than a thousand passengers and crew on board. Nobody had any idea that they were steaming into any kind of danger at all. But lurking in her path was U-30 a Type VIIA U-boat armed to the teeth and sent to sea even before war began to prey on British merchant shipping.
Alone and unarmed the Athenia made an easy target. A torpedo struck home in her engine room, killing dozens of crew and passengers in the dining room above - and fatally wounding the ship.
When the German Naval command realised that American citizens had been killed they hastily denied that the Athenia had been sunk by a U-boat and claimed it must have hit a British mine instead. The truth did not come out until after the war.
The “Eyewitness World War II” series is a growing collection of ebooks that contain original eyewitness accounts and contemporary newspaper reports of the action in question. You can find more ebooks in this series by searching for “Eyewitness World War II” or by visiting the military page of our website.

Leonard James has written dozens of books, mostly on history or military subjects for a wide audience. He is uniquely placed to analyse and comment upon the accounts used in the “Eyewitness World War II” series.
Posted by Rupert Matthews at 01:35 No comments: 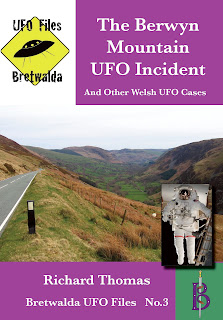 A book dedicated to the famous UFO incident in Wales which convinced many locals that something odd had crashed up on the remote slopes of Berwyn Mountain. This book uncovers the truth.
In recent years Wales has become synonymous with stories of UFOs and alien invaders with shows like the new series of Doctor Who and its sister series Torchwood regularly using the streets of Cardiff for location filming of their alien invasions. But bizarrely mirroring fiction, in 2008, a real life UFO incident involving the near collision of a South Wales Police helicopter with an "unusual aircraft" took place near RAF St Athan, just outside the Welsh capital.
If there is a "Welsh Roswell" however, it has to be the Berwyn Mountain Incident of 1974, where it is alleged that a UFO crashed on the isolated and sparsely-populated area of moorland in the north-east of Wales, and like at Roswell wreckage and dead alien bodies were secretly recovered by the military soon thereafter.
What separates the Berwyn Mountain incident from other UFO crash stories like Roswell, however, is the immediate reaction of the local residents. To begin with, no one was talking about UFOs and aliens, far from it. People living in the area thought that a plane had crashed on the mountain and the witnesses reacted by trying to save the lives of any survivors. The police were called in and set up a search team that was later joined by an RAF Mountain Rescue Team.
So what really happened up on the Berwyn Mountain? Read on to find out.

Richard Thomas is a writer of non-fiction books, magazine articles and newspaper columns. He has written articles on a wide range of subjects for the South Wales Evening Post, Alien Worlds, UFO Matrix, Mindscape, Paranormal Magazine and many other publications.

Posted by Rupert Matthews at 09:25 No comments: