An Interview with Derek Hayes, author of Maid of Turpin’s 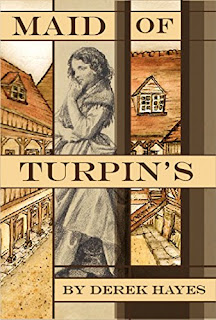 Young Sybil Turpin is an innkeeper who caters for the unsavoury underworld of 18th Century London. When she gets involved in a fiendish plot about spies and political intrigue her life is suddenly in danger from the most ruthless of men.
The year is 1720 and the government of Prime Minister Robert Walpole is overwhelmed by a criminal scandal which threatens to bankrupt the country. Richard Hamilton secret agent of the crown is sent to investigate. The story centres around the notorious tavern in Honey Lane; a lawless neighbourhood within Cheapside.
Turpin’s is ruled by a feisty young Sybil Turpin; an eccentric character who bathes daily in a hogshead barrel and rides like a highwayman.
She and Richard, himself an unconventional character, start as adversaries but when more brutal criminal activity unfolds, they join forces and their quest leads them around the streets of London, from Tyburn to the Bank of England; through Vauxhall Pleasure Gardens to a prison vault under London Bridge.
Richard Hamilton may have met his match with this bold young woman but the Maid of Turpin’s has a further challenge ahead, far beyond her comprehension or ability.


An Interview with Derek Hayes

Hi Derek. Thank you so much for agreeing to answer some questions on my blog about your writing. Firstly, please could you tell me a little about yourself?
I’d describe myself as a well-fed bookworm, people-watcher, storyteller and an expert at make believe. They are lifelong attributes and still as useful now as they ever were. I read a lot and have quite diverse tastes. I usually have two or three books on the go at the same time.
I was a child of the fifties, but I hasten to add a very young one. I live in Wiltshire with my wife Jennifer and lots of grandchildren nearby; still able to indulge the story telling.  I spent most of my working life in the NHS and that was where the people-watching began. It was always a privilege being present through the critical times of other people’s life experiences; often of the dramatic and terminal kind. But then there was hospital humour; usually itself profoundly unnerving but always a palliative for the distress and sadness. Experience enough for several lifetimes.
(I bet!)
And tell us a bit about your Langford series of books.

This is where the people-watching became reality for me. Set in the 1950s Langford Follies are a study ...

You can read the entire interview HERE

https://lindasbookbag.com/2016/12/10/an-interview-with-derek-hayes-author-of-maid-of-turpins/
Posted by Rupert Matthews at 02:58 No comments: 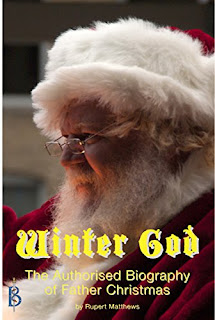 Some people call him Father Christmas, other people name him Santa Claus, but whatever name he goes by we all know him.
He is the jolly, fat man who comes out only on Christmas Eve. He loads his sleigh up with toys for all the good children in the world. He wraps himself up in a warm, fur-lined suit of red cloth with matching hat and warm black boots. Then he hitches up his magic flying reindeer, leaves behind his workshop at the North Pole and takes to the skies. For hours he gallops across the wintry, frozen landscapes to bring toys to millions of excited children around the world.
He has become the living embodiment of the Christmas Spirit. But where did this loveable old boy come from? How old is he? Has he always been so jovial? And what about the elves, reindeer and North Pole?
Many people think that Santa was invented for an advertising campaign by Coca Cola. Others date him to Victorian times. A few may place him back in the 18th century or even Tudor times. But they are all wrong.
He is much, much older than that.
This book traces the development of our favourite Christmas character from his origins many centuries ago down to the present day. We learn when and how he started giving presents to children, why he is so fat and where the reindeer came from - among many other things.

Posted by Rupert Matthews at 01:23 No comments: