BOOK OF THE MONTH - August - A Fate Worse Than Debt

A Fate Worse Than Debt
by Lee Rotherham 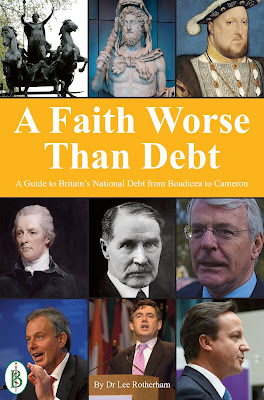 As the UK talks of cuts and austerity, this book explores for beginners the true scale of our financial problems, and some of the controversies behind modern spending. Warning: do not read if you suffer from high blood pressure, or lack a sense of humour in a crisis. Among the questions answered are: What is the difference between Deficit and Debt? How much does the United Kingdom Government really owe? Who is Scotland's forgotten debt genius? How big could you build a new Hadrian's Wall from Pound coins paid out of Britain's debt? Why was Britain's first civil war two thousand years ago triggered by debt repayments? How did WW2 US airmen unexpectedly help bail out Britain's war effort? What was the Geddes Axe, and how far did it swing? What can a wombat's posterior warn us of? How big is our creek today and is there a paddle? Launched to coincide with the Coalition Government's "make or break" 2013 Budget, this book puts the country's financial problems firmly under the microscope. It explains what is going on and why in terms the layman can understand - and will find absolutely terrifying. Possibly the most important book about government you will ever read.
Buy your copy HERE
Posted by Rupert Matthews at 06:09 No comments:


An ebook containing eyewitness accounts of the RAF’s first big night raid on Germany. Complete with explanatory text and background on the men and machines involved.
By March 1940 World War II was six months old and yet the RAF had still not launched a major night raid on Germany. They had been held back by the French who insisted that only military bases could be bombed - not weapons factories or transport links - and by their own navigational problems that made finding small bases at night a problem.
But in March 1940 Geman bombs killed a British civilian in Scotland and the RAF was ordered to carry out a major raid in retaliation. The target chosen was the great German air base at Sylt. It would prove to be a crucial raid, teaching the RAF how little they in fact knew about night navigation and night bombing. The lessons of Sylt had to be learnt, and learnt fast.
The “Eyewitness World War II” series is a growing collection of ebooks that contain original eyewitness accounts and contemporary newspaper reports of the action in question. You can find more ebooks in this series by searching for “Eyewitness World War II” or by visiting the military page of our website.

Leonard James has written dozens of books, mostly on history or military subjects for a wide audience. He is uniquely placed to analyse and comment upon the accounts used in the “Eyewitness World War II” series.

Posted by Rupert Matthews at 02:13 No comments: