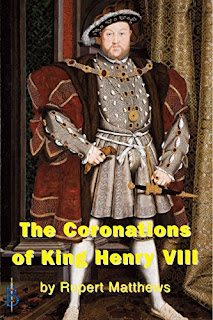 Posted by Rupert Matthews at 02:57 No comments: For many centuries it was accepted almost without discussion that the priesthood, and pastoral work more generally, was exclusively a male domain. Women had a role within the Christian Church, as nuns or lay workers, but the giving of the sacraments was seen as a male preserve. And yet for centuries rumours and legends have swirled about that one woman did get to be pope in Rome. The Catholic Church has always denied the stories, but they refuse to go away. It is now time to look anew at these old stories and try to discover the truth that lies behind them. In this book Oliver Hayes looks at the legends of a Female Pope and uncovers the startline truth that lies behind them.
Contents
Foreword
Chapter 1 - The Legend of the Female Pope
Chapter 2 - The Legend under Scrutiny
Chapter 3 - The Real Female Pope
Buy it HERE
https://www.amazon.com/dp/152037657X?ref_=pe_870760_150889320
Posted by Rupert Matthews at 01:47 No comments:

NEW BOOK : The History of Buttons