Sceptic at Large reviewed in the Northern Echo newspaper 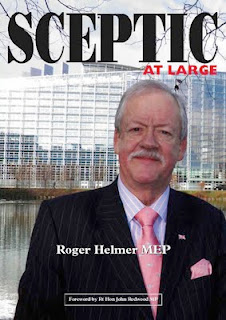 Peter Mullen’s Book review
Sceptic at Large by Roger Helmer (Bretwalda Books) £9.99 ISBN 978-1-907791-20-8
Roger Helmer stands out like a Robin among sparrows in the general mess of bland and characterless politicians. He has been a member of the Conservative group in the European Parliament since 1999. This lively, cheerful and entertaining book is an outline of some of Helmer’s vigorous personal campaigns against the consensus politics of the great majority of MPs and MEPs who seem concerned with very little apart from their self-preservation. But Roger has his head above the parapet permanently and it is a miracle that he has not had it shot off a dozen times before now.
He is no mere rabble-rouser or maverick for the perverse pleasure of being the only one out of step. On all the issues which engage him, he is logical, rational and highly informed. On the universal fantasy of global warming, for instance, he deals in facts and plain speaking:
“Is global warming happening? No. The world has got slightly cooler over the last ten years and the rate of cooling is accelerating.”
Even if global warming were happening, would the energy policies of the Coalition do anything to mitigate it?
“No. We are pouring truckloads of money into a doomed project and causing huge damage to ourselves, to European economies and to our children and grandchildren.”
He is forthright on the position of the Conservative party in the Coalition: “If the Conservative party has ceased to be conservative, what exactly is the point of it?”
As for rampant political correctness – the totalitarianism-lite under which we are now ruled, Helmer protests against the issue by the EU of three million diaries listing the feast days of Islam, Sikhism and Hinduism but with no mention of Christmas or Easter. He rightly sees it as preposterous that Europe, which was founded on Christianity, should make no mention of its major festivals.
The EU is a shambles of inefficiency and corruption and its current policies will do nothing to resolve the biggest financial crisis since the great crash of 1929:
“The Greek bale-out is under a cloud. The Germans hate it. The funds being poured into it might keep Greece out of hock for a year or two, but if they have to cover Portugal or Spain as well, they’ll soon run out.”
And while the Labour party, the trades unions and the left-wing newspapers are screaming about the “harsh cuts,” the government is still borrowing £millions every day. There is a general refusal to face up to the severity of Britain’s financial predicament:
“One of my very distinguished and well-known colleagues suggested to me that it is no longer daft to think of keeping a suitcase of cash under the bed. But which currency – and which bed?”
Here is a man who has seen from very close quarters for twelve years how the EU operates its colossal fraud on European nation states and their people. Roger Helmer concludes:
“Each new EU treaty transferred more powers to Europe. It took years in the European Parliament to convince me that the EU was beyond reform and that it deserves to be put out of its misery. The EU bus is going towards ever-closer union. We can either go along or get off.”
This is a scintillating book with not a single dull paragraph.
Posted by Rupert Matthews at 23:48