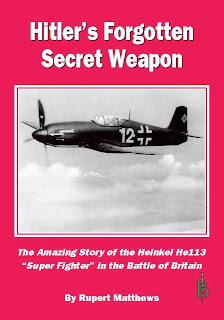 Our first ebook sale this month was a copy of Hitler's Forgotten Secret Weapon by Leonard James, sold in the UK.

About the Author
Rupert Matthews has written over 150 books for different publishers, achieving significant sales in a variety of markets both in the UK and abroad. His works have been translated into 19 languages and have been shortlisted for a number of awards. Rupert has been a freelance writer for 20 years, working in-house at a major book publisher before going freelance.

Leonard James is the son of an RAF veteran who fought in the Battle of Britain until wounded. Leonard grew up in a household dominated the RAF, and later married the daughter of an RAF squadron leader. This is his first book about the RAF, but is far from being the last.

Buy your Kindle copy HERE.
Buy your copy on other formats HERE.

Posted by Rupert Matthews at 02:13