The Dutch spent eighty years fighting for their independence from Spain. The conflict, though heavily about religion, was fired by a tax, and essentially won by a forced loan.
The Low Countries had been simmering after heavy-handed countermeasures had been used to suppress religious rioting. In this context, introducing a ten per cent sales tax, against the will of the States General, was not a wise move by the Regent, especially given the large number of trading middlemen in the country who would be hit by compound taxation in turn.
The war required large numbers of Spanish troops, and these needed paying. In 1576, a Spanish treasure fleet was driven by a storm into an English port. England at this stage was at peace with Spain, and while supportive of the Dutch was treading a fine diplomatic and legal line, not least as Drake had been darting around Spanish imperial waters.
But the bullion being shipped happened to have been loaned by Italian bankers, and properly speaking was not Spanish but Genoese until it arrived. Elizabeth took on the loan herself, thus depriving the Spanish governors in the Low Countries of vital finances. Spanish troops reacted by sacking the city of Antwerp to find their pay themselves. Aside from the permanent damage it did to what had been one of Europe’s great emporia, it strengthened the Dutch opposition at a vital moment, and consolidated a revolt that bled the Hapsburgs and ultimately led to a separate state.
Lesson from Antwerp: Debt weakens the ability of a state to manage crises. It is so powerful that it can be used as an act of war.

Buy your copy at Amazon or your local bookshop 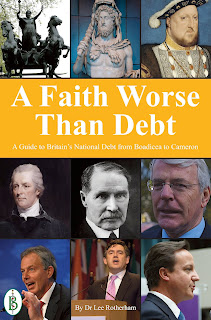 Posted by Rupert Matthews at 00:24