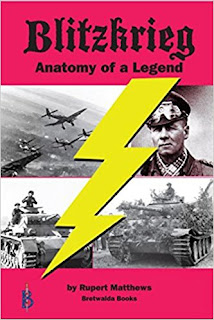 When the German armed forces invaded Poland in September 1939 everyone expected the war to last at least six months and for the Germans to sustain heavy casualties. In fact the fighting was over within days. The German army had pulled off one of the most astounding victories in modern times. Urged on by Hitler's ambitions, the following year the German army invaded Denmark, Norway, Belgium and the Netherlands before attacking its most powerful enemy to date: France supported by Britain. Once again the speeding German panzers, screaming Stuka dive bombers and relentless artillery smashed through everything sent against them. The French army was crushed in a matter of days, and the British sent packing from Dunkirk. The world was aghast at the scale of these sweeping victories and at the speed with which they had been achieved. The Germans had unleashed a new form of warfare: Blitzkrieg, or "lightning war". It was new. It was stunning. It was unstoppable. But what actually was it? In this book historian Rupert Matthews explores the origins of Blitzkrieg, explains how it operated and studies its most famous victories before moving on to discuss how the tactic is still with us today.
Buy the paperback HERE
Buy the ebook HERE
Posted by Rupert Matthews at 01:34