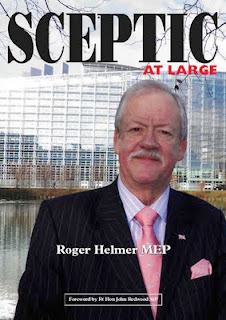 For a limited time only we have reduced the price of our ebook "Sceptic at Large" by Roger Helmer MEP. You can now buy this ebook at half price.

We have also reduced the price of the printed book from £9.99 to £6.99. Buy your copy via Amazon HERE

A controversial critique of the European Union by maverick UKIP MEP Roger Helmer.

In this highly readable book, one of Britain’s most colourful and controversial figures gives his views on where the EU is going wrong and why David Cameron’s policies are contributing to the unfolding disaster in Brussels.

Covering a wide range of policy topics, Roger Helmer explains how democracy is being eroded robbing freeborn Englishmen of their birthrights of freedoms and democracy that have taken generations to secure. Roger also casts a sceptical eye over the Climate Change industry, the grip of political correctness on the EU and how the rural way of life is being undermined by an increasingly urban chattering class.

The book closes as Roger peers into the future to predict what the next five years has in store for Britain, the EU and for the British people that he is so proud to represent.

Illustrated with photos, this book combines serious political thought with an entertaining writing style that has made Roger Helmer one of the more popular bloggers on the centre right of the political spectrum.

About the Author
Roger Helmer MEP was first elected to the European Parliament in 1999 for the East Midlands of England region. In 2006 he was expelled from the Conservative Group, and later readmitted after public pressure. He has been re-elected top of the poll at every election since. Roger formerly worked for Procter & Gamble and with Coats Viyella in Hong Kong, Singapore, Thailand, Malaysia and Korea.
(Less)
Posted by Rupert Matthews at 00:50