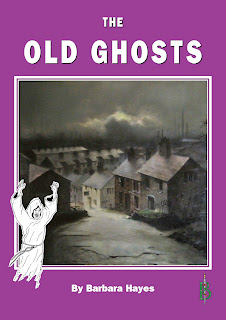 For a limited time only we have reduced the price of both the printed and ebook versions of this fantastic book by veteran writer Barbara Hayes.

Description
The British Isles are the most haunted places on Earth. Ghosts shimmer through stately homes and humble cottages alike. They linger at lonely crossroads and walk the ancient trackways. But few people know much about them. In the stories in this book Barbara portrays exactly how Boggarts, Banshees, Co-Walkers, the White Lady and the Old Hag really behave.

About the Writer
Barbara Hayes worked on the editorial staff and spent many years writing stories and picture strip scripts for the Amalgamated Press, situated in Farringdon Street, which is round the corner from Fleet Street, London. Later Amalgamated Press became Fleetway Publications and subsequently part of the Daily Mirror IPC publishing group.
Barbara was just in time to work with some of the old Fleet Street hacks in all their drunken glory before the move away from Fleet Street to modern technical respectability.
She got advice straight from the lips of Hugh Cudlipp, the famous editor of the Daily Mirror, and became married to an Amalgamated Press editor, Leonard Matthews, who rose to be a managing editor and then an editorial director.
Over the years she has had some 80 books and about 7300 scripts published by companies from England to Australia to South Africa to Florida and back to Holland.
She likes to think of herself as an old hack writer who succeeded mainly because she always got her work in on time and the right length - but if you read on carefully you might find quite a few other hints to help you.