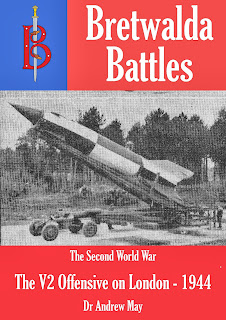 Key note: In September 1944 Hitler unleashed on London his ultimate Vengeance Weapon - the V-2, a ballistic missile that arrived without warning, demolished entire streets and against which there was no defence.

The development of the top secret V-2 ballistic missile began almost as soon as Hitler came to power, but frequent problems with technical issues meant that a working prototype did not appear until 1942 and the first V-2 was fired in anger in 1944.

When the V-2 entered service it sent shock waves through the Allied high command. Arriving at speeds faster than the speed of sound, the V-2 arrived without warning, but with enough force to destroy an entire street. The death tolls from V-2 blasts could be horrific, with more than 140 people being killed in an instant.

And against these terror weapons, London had no defence. The parabolic flight path of the V-2 meant they climbed almost to space before falling back down to smash London.

In this book defence analyst Andrew May traces the development of the V-2 from pre-war pipe dreams to horrific reality. He looks at the reasons why Hitler unleashed the fury on London and how the Allies responded - and at the impact the campaign had on ordinary Londoners. A true tale of terror, horror and courage.

About the Author
Andrew May is a former defence scientist with an MA from Cambridge University and a PhD from Manchester University. His thirty year career spanned academia, the civil service and the defence industry. He has worked on advanced technology research in Farnborough, strategic planning in Whitehall and operational analysis for a large defence company. He is now based in the South-West of England where he works as a freelance writer and blogger.
Posted by Rupert Matthews at 01:26