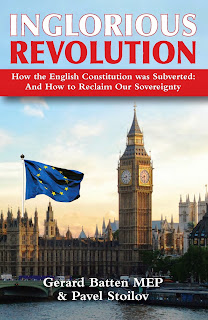 • The Fall of Parliament
• EU’s ‘New Legal Order’
• EU Citizenship and the Abolition of Monarchy
• European Communities Act 1972
• The Case of the Metric Martyrs
• The Rule of Nonsense
• European Arrest Warrant and Habeas Corpus
• Human Rights Act 1998
• ‘Independent and Upright’?
• We live in an illegally constituted state

• The Legal Solution.
• Appeal to the Sovereign
• Democratic Solution


About the Author
Gerard Batten is a Member of the European Parliament for the United Kingdom Independent Party (UKIP), representing London. He sits on the party’s national executive and is recognised as one of the most senior members of the party. Pavel Stroilov is a Russian journalist, historian and political exile living in London. He has smuggled secret Soviet documents to the West and was granted political asylum in London.