The Road to Freedom by Gerard Batten MEP     Bretwalda Books Ltd £8.99ISBN 978-110440-02-5
This short book is a piercingly clear exposure of the biggest fraud of our time: our catastrophic imprisonment in the EU and Cameron’s disingenuous and futile promise to renegotiate the terms of our membership and give the country a straightforward in/out referendum. The promise is phoney first because there is no realistic possibility of such a renegotiation; secondly because Cameron is not in favour of our withdrawal; and thirdly because any referendum with be a stitch-up by the Eurocrats – just like the referendum of 1975. Cameron is the only party leader to be promising a referendum but we have noticed already that his promises are like pie-crusts. And he can provide the referendum only if he wins the 2015 general election – an outcome which is in considerable doubt. Even if we get as far as a referendum, the EU bureaucrats will mount the biggest advertising campaign the world has ever seen – all paid for out of our taxes – to scare the living daylights out of us in case we vote for withdrawal.
The case against the EU is that it is an empire of lies. This is not my jaundiced opinion. It is a fact. Not only is the EU an empire of lies, that, according to Jean Claude Juncker, President Elect of the European Commission, is exactly what it should be. This commissar is on record as having said, “When the going gets tough, we lie.” The EU is an abstracted, remote tyranny and that also, says Juncker, is how it should be. He really believes that the people of Europe should have nothing to do with the governance of Europe. He has said too that he thinks discussions and decisions on EU economic policy should be conducted in secret conclaves of the top bureaucrats.
The whole system and method of the EU is alien to the British way of doing things. As it says clearly in The Road to Freedom: “Bureaucracy has replaced democracy.” Historically in Britain we had freedom under the law. Explicitly, there is no such freedom under EU terms of government which is by Directives and Regulations issued not by the European Parliament – which is a powerless talking- shop – but from unaccountable commissioners, in effect a politburo: “Freedom of the individual under the law allows people to do whatever they wish, so long as they are not breaking the law. Directives and Regulations prescribe certain standards of conduct and behaviour and enable the state to require people to act in ways that its functionaries deem to be good and worthwhile.” In other words, instead of being free to do all that is not forbidden, we inhabit a living hell in which we may do only those things which are officially prescribed under EU diktats. And how! We are bound by, as Batten reminds us, “20,868 items of legislation.”
We were duped from the start when Ted Heath told us the great lie that membership of the Common Market (as it was then) would never entail any loss of our national sovereignty. But Jean Monnet, one of the EU’s founding fathers, wrote, “The sovereign nations of the past can no longer solve the problems of the present. They cannot ensure their own progress or control their own future. And the Community itself is only a stage on the way to an organised world of tomorrow.” Ever closer political union is the name of the game and the goal is a United States of Europe.
The deficits far outnumber the benefits as the lies proliferate. For example, we are constantly told that the EU promotes free trade. It does not. It is a customs union denying its member states free trade with the rest of the world. There is the scandal of the European Arrest Warrant under which any citizen in the EU can be extradited to any member country and tried by courts that make the machinations of the Mafia look really quite respectable. We have no control at all over the numbers of EU citizens coming here to look for work.
Our imprisonment in this new totalitarian regime is made secure by something which at first glance looks as if it might be a way of escape: Article 50 of the Lisbon Treaty which declares: “Any member state may decide to withdraw from the Union in accordance with its own constitutional requirements.” Then you read the small print. The process of disengagement is envisaged to take two years – but it may be prolonged indefinitely by the bureaucrats who control us.
People think you’re exaggerating when you say that the EU is a totalitarian regime. But, as long ago as 1990, the senior civil servant C.H.Sisson said, “I cannot understand why, now that the Soviet Union is a thing of the past, we are busy constructing something very much like it in Western Europe.”
There is only one way out and that is for us to decide to withdraw unilaterally. The trouble is that not one of the major parties at Westminster has the slightest intention of doing such a thing. The Road to Freedom is the most succinct critical description of the workings of the EU, an everyman’s guide to the empire of lies. 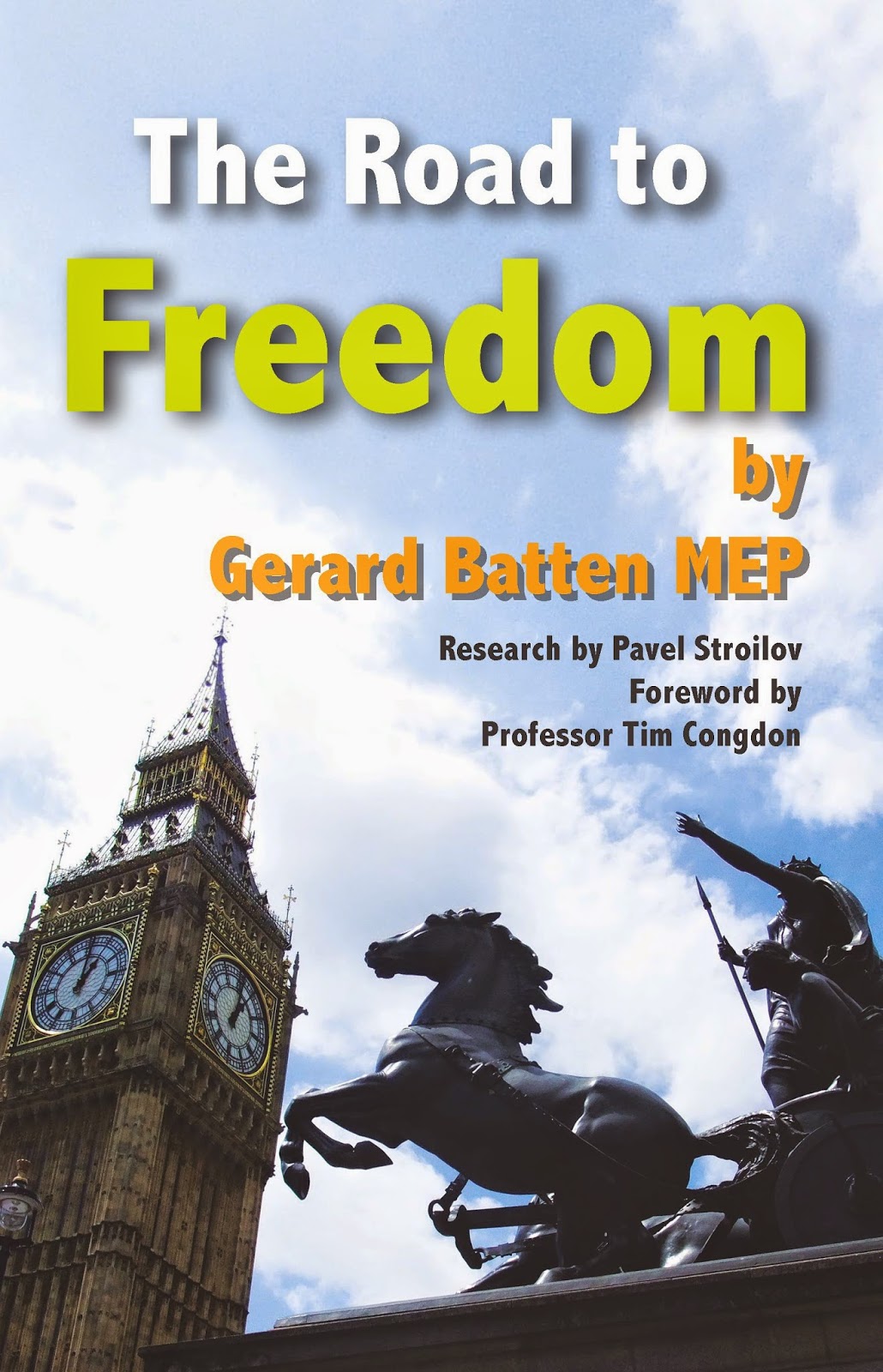 Posted by Rupert Matthews at 10:59