Bretwalda Author Andrew May﻿ has a new book out, and its been reviewed!

Bretwalda Author Andrew May﻿ has a new book out, and its been reviewed by Brian Clegg! 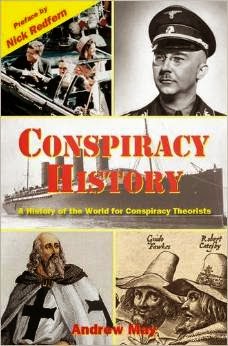 There are two aspects of this book that might raise a suspicious eyebrow in a potential reader. One is the cover, which is a trifle garish and reminiscent of those local history books you get on holiday in Devon. The other is the idea that, as a book about conspiracy theories, it is going to be all about topics like the Moon landings being faked and Princess Diana being murdered at the behest of the British royal family.

I can immediately allay those fears. This slim book is a solidly written collection of historical stories, many dating back several hundred years or more. The lunatic fringe conspiracy theories are mentioned in the introduction, where Andrew May does exhibit possibly excessive open-mindedness by saying that David Icke's theory that the world is run by shape changing lizards is 'probably too far fetched to be true'. But in his historical explorations, which range from ancient Egypt, through a whole raft of British and European kings and queens, to twentieth century events, he is soberly careful to distinguish what probably was indeed a conspiracy from wild speculation.

http://brianclegg.blogspot.co.uk/2015/01/conspiracy-history-review.html
Posted by Rupert Matthews at 23:12