On Saturday 17th March, Crosby summoned the entire campaign team into the office for his traditional eve of battle pep talk. On Tuesday 20th March the official election period would begin, we would have full control of Boris’ activities and the battle would intensify. Boris would walk into our office as a candidate, not just the mayor. It was the phase of the campaign we had planned meticulously for and looked forward to the most. After this there was no turning back. Many of us couldn’t believe it had finally arrived.
Crosby had ordered boxes of bright blue shirts with ‘team member’ slogans for everyone to wear. Before he began his speech, he pulled on one of the shirts and instructed everyone to do the same. I looked around and for the first time I noticed just how big the team had become. It seemed like just a few weeks ago that a handful of us had taken possession of this vast office space in Savile Row. Now, the room was overcrowded with two to a desk. One wall was covered with rows and rows of trays, where volunteers deftly sorted postal votes around the clock. In the middle of the room stood an industrial sized shredder – with everyone under orders to shred anything, no matter how insignificant. (Although he could never prove it, Crosby was fairly sure there was a Labour mole somewhere in the office.) Boxes of leaflets occupied every available bit of floor space. It was an impressive, slick operation. It had to be, if we were to beat Ken.
Once everyone had their regulation shirts on, Crosby summed up the state of the race so far. It was going to come down the wire. Boris was almost universally liked, but this didn’t necessarily translate into votes. Londoners were finding it tough, and they were extremely receptive to any prospect of relief. Even though they didn’t like Ken, many were willing to take a risk on him if it meant a chance of lower fares. It meant that we had to raise the importance of the risk and remind people what they would be returning to if Ken won again. However, he cautioned, we wouldn’t win the election just by attacking Ken. Because Boris was liked, people were willing to hear his message. They wanted to hear a specific plan for the future, and a clear sign that he would fix things in the long term. Therefore, we had to constantly talk about the 9-point plan and how we were on a journey. Everything we did and said needed to re-enforce the main campaign narrative; 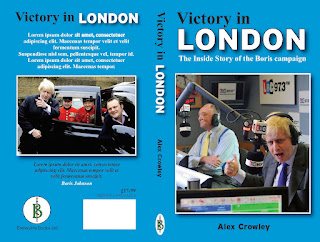 The inside story of the campaign to put Boris Johnson back into power as London Mayor told by one of the top members of his campaign team who was at Boris's side throughout. In 2012 the political stakes could not be higher. After one term in office and despite enjoying personal popularity, Boris Johnson faced an uphill battle for re-election as Mayor of London. Buffeted by Tory unpopularity, the toughest financial conditions in years and accusations that he was out of touch and Mayor, Boris faced the fight of his political life. And to top it all, he was up against Ken Livingstone, one of the most formidable and ruthless campaigners in British politics. This is the first and most authoritative book about Boris Johnson's re-election. Told by an insider, it will reveal the inner workings of the campaign and how one of the most high profile politicians in the country and his extraordinary team pulled off an election victory that was closer than anyone dared think. Based on an unprecedented level of access to all the key players, including Boris himself and campaign director Lynton Crosby, this is a must read for anyone interested in politics. * Launch Event at Conservative Party Conference. * High profile political bloggers will push the book * Sunday newspaper serialisation under negotiation Social Media * The book will be "Book of the Month" for Bretwalda for November 2012 which will involve an intensive FaceBook and Twitter push as well as the usual book launch marketing.