Back in April 2008 I wrote about how it was the JFK Assassination, and its modern day counterpart 9/11, that first really got me seriously interested in events and ideas that way too many intelligent people sadly debunk as "conspiracy theory." Looking back on it now, I used to be one of these "intelligent people" until I started listening to shows like Len Osanic's comprehensive Black Op Radio (easily the best podcast dealing in the realms of parapolitics) so I was very excited when Len agreed to do an interview with us. What is more, it will allow us to cover the JFK conspiracy, and cover-up, with some depth.

Richard Thomas: First things first, thank you so much for giving the Room 101 readers the time to answer these questions. I'm a big fan of the show and I'm sure many of the RR readers are too, so it's really appreciated. I believe you hail from outside the US, like me. Some might think it a little unusual that you host a show dedicated to researching the death of a US President. How did you first become interested in the JFK Assassination and what's the origin of Black Op Radio?

Len Osanic: Years ago, I wrote to Col. Fletcher Prouty [Chief of Special Operations for the Joint Chiefs of Staff under President John F. Kennedy and later a prominent critic of the CIA - ed.]. We became friends and I produced a CD-ROM for him. I started doing radio show interviews with him. When he became ill, I continued on my own. After that, I thought I could do a better job asking the questions, since I knew the topic quite well. That was back in 2000 some 430 shows ago.

Richard Thomas: Growing up with the Zapruder film footage regularly played on various documentaries about the assassination, I'd always just assumed Kennedy got shot from the front. So it was a bit of a shock to discover that according to the Warren Commission, Lee Harvey Oswald supposedly shot the President from behind. What, for you, is the best smoking gun evidence pointing towards a conspiracy?

Len Osanic: The photo of CIA General Edward Lansdale in Dealey Plaza on November 22nd, the day of the assassination.

Richard Thomas: If you had to point out another two or more reasons for dismissing the so-called Lone Gunman Theory what would they be?

Len Osanic: The fraud of CE399 (The bullet) and almost all of the Warren Commission. I mean, all the evidence exonerates Lee Oswald. Of course, The Sixth Floor Museum is the biggest fraud of all, trying to obscure the fact that Dallas was the city that allowed the murder to happen.

Richard Thomas: Other than the ridiculous lone nut Oswald theory, there seems to basically be three main schools of thought among researchers on who was responsible for the assassination. Roughly they can be broken down as: the Communist (the Soviet Union and/or Cuba), the Mob and CIA. Personally, I think "the Communists" is exactly what the real conspirator's wanted us to think, but what are your thoughts?

Len Osanic: It appears that the Joint Chiefs wanted to invade Cuba and I suspect Lee Oswald was supposed to have been flown there by Jack Ruby. It may be that Officer Tippit refused to escort Lee to the airport once he learned JFK had been shot and he was killed before he revealed the plot.  [according to the Warren Commission version of events Tippit was shot while trying to arrest Oswald - ed.]

from Para-News by Richard Thomas.
Buy your copy HERE 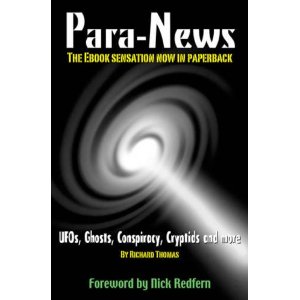