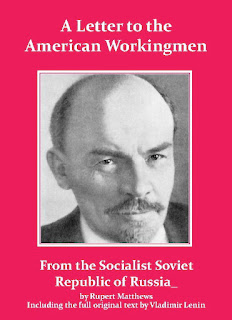 The full, original text of this rarely reprinted book, together with explanatory notes, introduction and conclusion by historian Rupert Matthews.

In the summer of 1918 the Bolshevik Revolution in Russia was 10 months old and was sweeping all before it. The Russian Communists were in the process of establishing their “dictatorship of the proletariat”. Not only that but they optimistically hoped that the working classes in other countries would start their own revolutions to usher in a new global age of Communism.

But in the USA, the Communist Party was in trouble. Many American working men were aghast at the way things were going in Russia. The USA had only recently declared war on Germany, but Russia had agreed a peace deal with Germany. American was still scarred by its memories of civil war, but Russia was now embarking on one of its own.

The American Communists appealed to Lenin to write a pamphlet that they could publish to give the Communist side of the events in Russia. This “letter” - in reality published as a booklet - is Lenin’s response. In it he explains why the Russian Revolution was turning out to be so violent, why Russia had made peace with Germany and urges the American workingmen to join the revolution. He seeks to draw analogies between Russi and the USA.

In his commentary, historian Rupert Matthews explains how in this letter Lenin provides a telling insight into his state of mind and thought processes at this critical time in his life, and in the progress of the Russian Revolution. He shows where Lenin fatally misread the situation in America and goes on to explain the consequences of this letter for the Communist movement in the USA and the West.
Posted by Rupert Matthews at 03:52